If you are considering a divorce, you are probably wondering: “How will my assets be divided?”

Most people fall into two categories. The first group assumes that all assets (money and other property) will be split 50%/50%. The second group believes that if they earned it, or if their name is on it, that asset will be theirs for the taking upon divorce.

Neither view is actually how things work in most states. Like everything else involving law and lawyers, dividing and distributing assets in a divorce is usually more complicated than you would think.

No matter where you live, money and other assets, that are acquired during the marriage ("marital assets"), are most often divided somewhere in the neighborhood of 50%/50%. There are nine states, called "community property" states, that actually require a 50%/50% division. The majority of states, however, do not require an equal split of assets -- but you still need to be prepared for a 50%/50% division. It is very common. In other words, judges love a 50%/50% split. Those states are referred to as “equitable distribution” states (like my home state of Virginia).

If you want a division other than 50%/50%, for your marital property (assets acquired during the marriage) you need to be prepared with some very specific and compelling arguments.

Here are the steps that we go through, in divorce mediation, when settling the division and distribution of your money and other assets:

STEP 1: CLASSIFICATION OF MONEY AND ASSETS. We label the assets -- which we call “property” (even if it is not real estate) as either belonging to the marriage or to an individual spouse. Some assets have characteristics of both. Those are called “hybrid assets” or “hybrid property”.

Here are the most common examples of how assets are classified. Be aware, however, that different states have different ways of viewing classification. You need to consult with a professional in your state to get key up-to-date legal information. The information below is applicable to my Virginia clients: 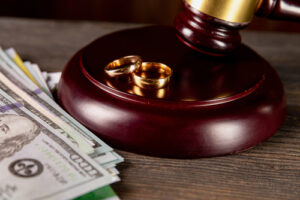 STEP 2: DIVISION AND DISTRIBUTION OF MONEY & ASSETS. The classification of an asset has a great deal of influence over how it is divided and distributed in a divorce. In Virginia, and other “equitable distribution” states (not the mandatory 50%/50% states, called “community property” states), the classification of an asset as “marital property” does not guarantee a 50%/50% division. It just makes it more difficult to get something other than 50%/50%.

Here are the most common examples of how assets are divided and distributed in an equitable distribution state, based on their classifications:


Note: At the end of the day, bad behavior must be extreme to have an impact on the division of assets. This is particularly true if the biggest jerk makes the most money.

IMPORTANT: Always remember that, just because your name is on an asset DOES NOT make it yours! and … Just because you earned the money DOES NOT make it yours! Remember: Assets acquired during the marriage (by other than inheritance or gift), and money earned during the marriage, are marital assets subject to division and distribution by the court.